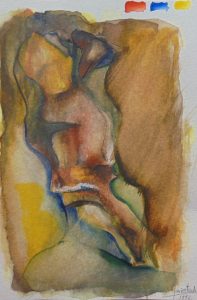 When I first met Javier I was only twenty-one years old. It could be said that he adopted me. He has always been generous and so really patient, he is the one who has taught me more, the one who has mostly influenced me.

He was a sort of magician and he still is a holder of so many and so strange knowledges. I remember the first time I paid a visit at his place, a penthouse with a large terrace located in one of the best districts in Madrid, full of books, paintings and scale models… That place soon became my refuge so I used to come on any pretext, just to talk about how things were going, to seek advice.  In this cosy place I was able to find the much needed peacefulness as there was something that allowed me to new readings, locations, stories and artists I had never been taught. I was privileged to see him modelling so many times, so quickly with a little putty. I have also been there for months, when he was building great ships for Madrid’s Naval Museum or for the Archaeological Spanish National Museum, in his studio, a place where one likes to stay, so chaotic, full of different items and half-done works, with a canvas or scale drawings of a boat displayed in the wall.

I used to come there, I looked for a place to sit and talked to him for hours, both of us smoking endlessly while he was at work or looking for a polishing tool or a paintbrush, no noticing the disorder or perhaps taking his inspiration from that mess.