We are showing a twelve-painting series of small format works depicting the golden age of British sport aviation. This series is based on the old cards and postcards, Which were so popular in Britain in the 1930’s decade and more Particularly in some astonishing albums published by the company sold Players That Cigarettes. The painting technique is always the same: oil on canvas glued on canvas esta plus a wood board (dm) Whose format is 20 x 30-cm. The style of These works is required and neat; furthermore, I have tried to show a great variety of colors and backgrounds. British Classics series includes the following aircraft. 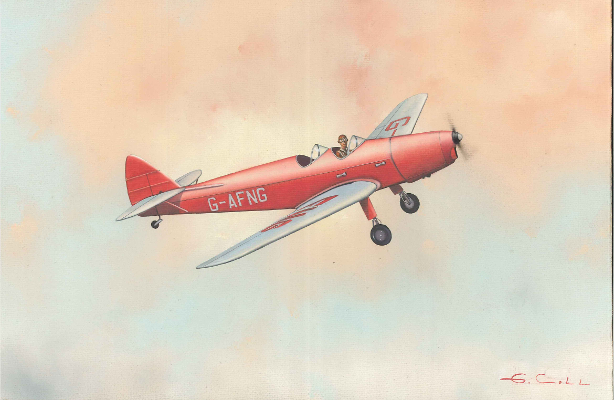 The lines of this flying beauty were depicted with some difficulty as the drawing is so really small. The DH.94 with license plate G-AFNG is still in service but converted in the Moth Minor Coupé variant.

The DH.85 with license plate G-ACOJ is still in service and holds the honour of being the oldest aircraft that crossed the Atlantic Ocean (although this took several stages). I have worked hard on the background which seems much more realistic than others. 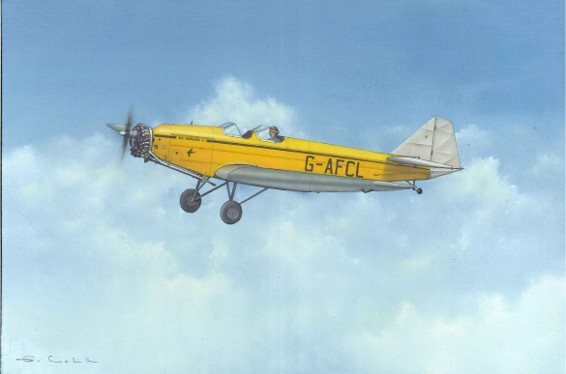 The Swallow 2 seems a little gangly with those straight lines and no careenage in both the engine and the landing gear; nevertheless it is possible to take advantage of this wonderful beast. It has been necessary to look for a background fitting the yellow shade.

This is the only painting of this series with some landscape added. The painting scheme with two different blue shades was used by the company Aircraft Exchange & Mart; I found the references of this really by chance. 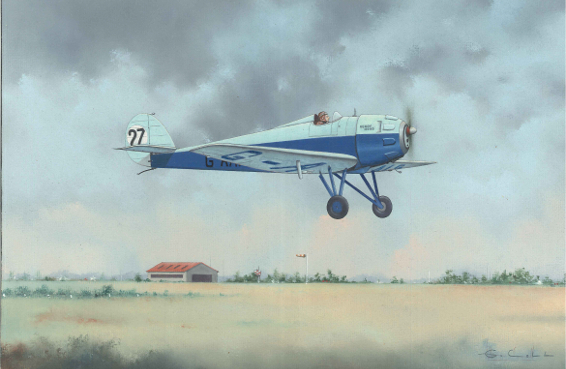 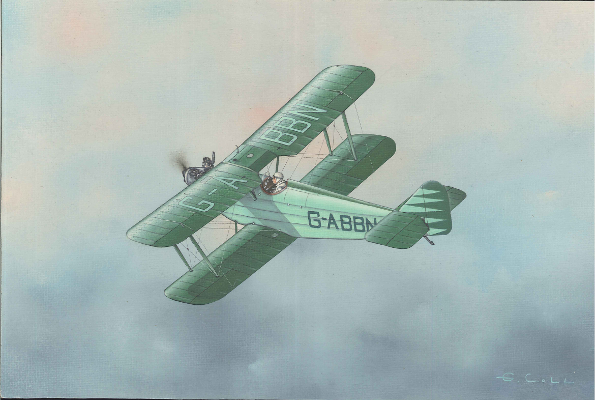 Another beautiful scheme using pastel green and dark green, flying with the well-known Sir Alan Cobham’s “circus” in 1932.  Sometimes, in order to depict these much delicate backgrounds I take a look to the paintings by Fernando Zobel.

The design of this racer was carried out by one class of students from the De Havilland Aeronautical Technical School; it is the first painting of this series. The tip of a blade was used to make the white profile of the license plates. 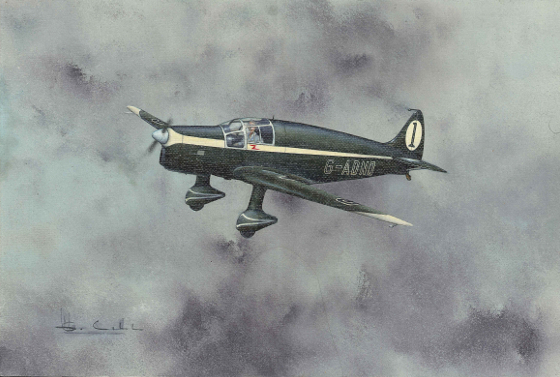 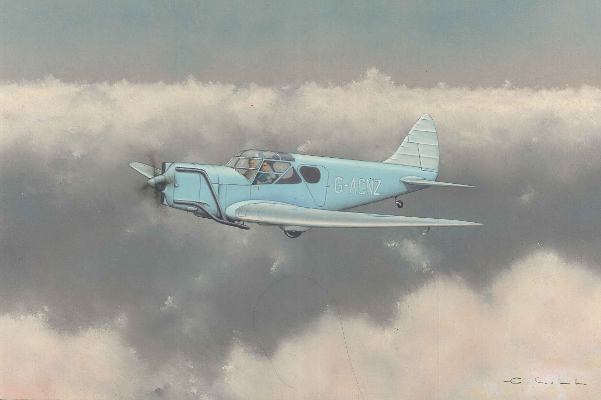 The Courier with license plate G-ACNZ caught my attention as it was equipped with a Napier straight engine and big exhaust pipes. The grey shades in the background are given green and red touches.

A nearly flat creamy background to emphasise the wonderful lines along with the turquoise blue and doped silver scheme; This Gull was a three-seaters aircraft, that’s why the pilot head is located much in the front. 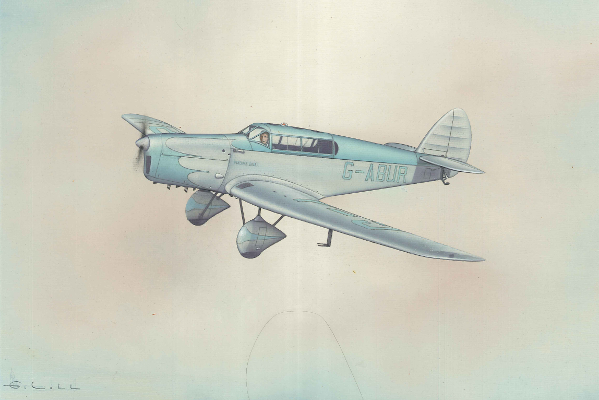 The much elegant designs of the Miles Aircraft stand out due to their “deco” lines. The painting scheme in the usual one in this particular period: a light creamy-yellow shade with red license plates and hubcaps.

While carrying a series of British Classic aircraft it is impossible not to take into consideration the very well-known Moth. The top view allows us to feature the whole, just because of the colours and the big-sized lettering painted on the wings. 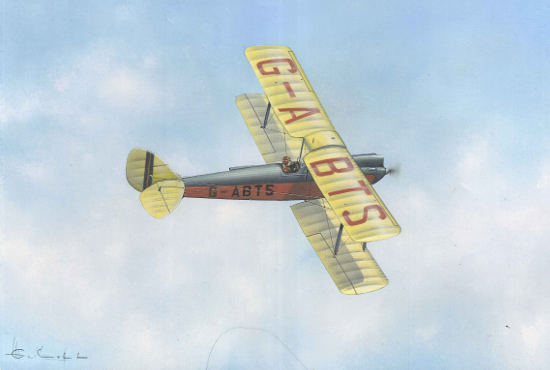 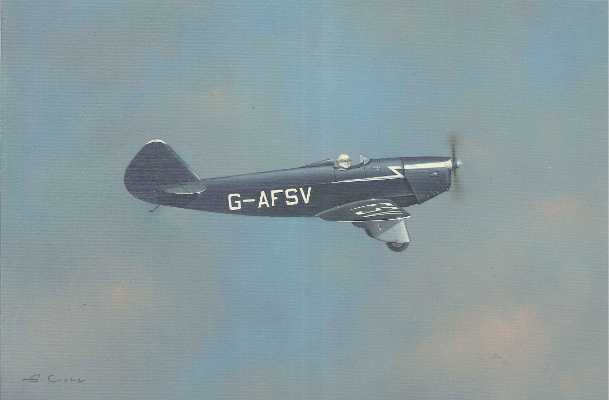 This small and nearly unknown aircraft is so pretty at any angle. The black finish has been replicated by applying very dark blue-grey paint added some light touches of green. The background seems nearly abstract.

Another small Classic that has to be taken into consideration: the well-known G-ABUU has been given different painting schemes; with a longstanding career, it is still in service. Both the airplane and the clouds in the background are painted white. 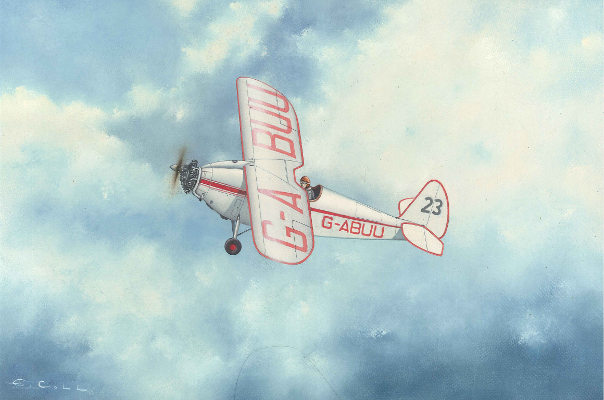 All the images are copyright (c) 2018 by Guillermo Coll. All right reserved. Copy and distribution are forbidden