The US inventor Charles L. Burdick patented the first airbrush in 1893; from that moment on, there has been a love-hate relationship between this tool and the Fine Arts. Some artists rejected using it claiming it was artificial and mechanical while some other enthusiastically welcomed that new device arguing it showed so many possibilities (making realistic, nearly photographic, works was one of those wonderful possibilities). Undoubtedly, some hyper-realistic painters like Audrey Flack, Ralph Goings or Ben Schonzeit have contributed to make this tool so popular. For those artists, the airbrush is a working item and furthermore, one of their ‘distinguishing features’. 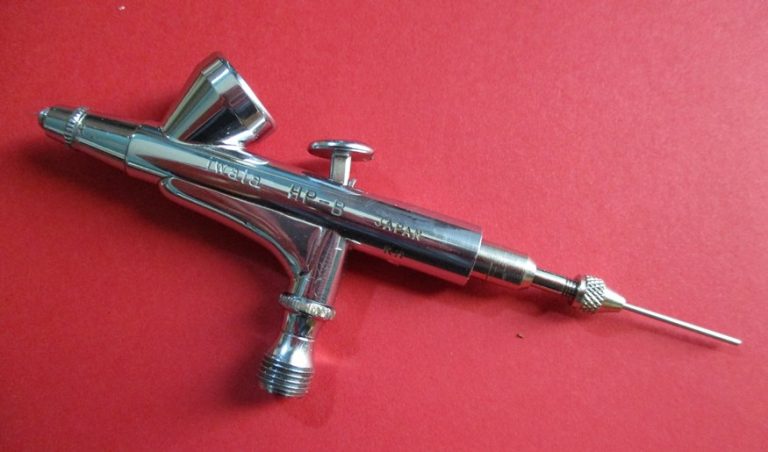 My very first airbrush was a Holbein Neo-Hohmi. It was a high quality tool but something in its design seemed wrong to me, the side ‘suction-feed’ or siphon tank which made the handling quite awkward. I much prefer the airbrush with tanks in the upper part, which are gravity-feed, much more stable, easing the movement of the hand.

Later, I have read about the Iwata’s top quality in general and about model HP-B in particular and it moved me to buy this airbrush, an astonishing tool which has been with me for nearly thirty years, free of flaws, enduring hard tests. After this long period of time both the nozzle and the needle are original bits (although some replacement would not hurt). I have got used to this Iwata HP-B’s whims and, in return, it has got used to my whims. It is a so-called ‘independent double-action’ airbrush equipped with a 0.2-mm nozzle. Quite precise, much lighter and smaller than the rest, the design is simple for an easy cleaning (a much complicated and unpleasant task). I have sporadically worked with many kinds of airbrush tools and I can say that I would not change the Iwata for some well-known classic ones like the DeVilbiss Super 63E or the sophisticated Paasche AB Turbo. I only use it to draw (in particular aircraft profiles). For the rest, such as miniature painting or varnishing, I now prefer a Harder & Stenbeeck model Focus, with interchangeable 0.4 and 0.6-mm nozzle and needles.